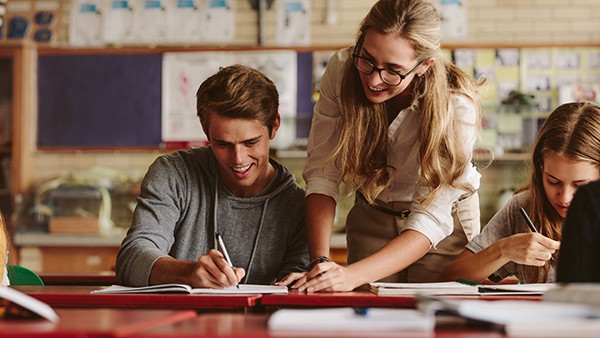 Posted at h in Education by admin

Writing is hard– for students, for adults and especially for academic language learners (ALLs), whether multilingual students or students from non-dominant backgrounds.  And I have found that teaching writing can feel overwhelming, laborious or, even worse, ineffective for me and my students.

For example, I have often made the mistake of assuming my students can take an example response to a writing assignment and be able to replicate it in their own words and with new content. In addition to giving them an example response, I have tried first teaching students the purpose, audience and basic structure of the writing task, and I’ve provided them with well-developed graphic organizers to help outline their ideas.  All of this is certainly helpful, but even for intermediate and advanced ALLs the writing task can still be herculean in nature because I have not explicitly helped the students to understand, practice and apply the language needed to do the writing I am asking of them.

There are different approaches to explicitly teaching students the language needed to write, but I have learned a remarkably helpful framework through the study of Systemic Functional Linguistics (SFL). Dr. Maria Brisk of Boston College has been working with teachers for over a decade to incorporate SFL as an instructional framework with positive results in student writing development. Here are the five SFL basics that have transformed my practice.

Not all writing is equal in its purpose, structure and its language demands, and it is important to understand those differences in order to teach them. The first step when teaching writing is understanding what genre (or hybrid of genres) you are requiring students to write by finding mentor texts or using student and/or teacher-created exemplars for your particular assignment and then analyzing those texts.

As part of the analysis of a mentor text, you should consider the language functions being used by the author. For example, when writing a report or explanation, one must use content-specific noun groups: colonial settlers from the northeastern region of the U.S. or the chemical mixture in the graduated cylinder. Or, when writing arguments, modal verbs are used to show the opinion of the author: could influence or might benefit.  Identifying just one or two language functions to explicitly teach in your writing unit will help you to focus your instruction and feedback and will not overwhelm your ALLs with language demands, reserving some of their effort and energy to do the critical thinking about the content that is required for the assignment.

Slowly and systematically analyzing mentor texts with students to help them understand the purpose, audience, structure and focused language functions of the genre of writing is critical in the SFL framework. It is important to note that you are deconstructing the text from a writing perspective, analyzing it for the author’s moves and language choices. This deconstruction is ideally done before students begin independently writing and can be done multiple times with multiple mentor texts.

The thing I particularly love about the SFL framework and Dr. Brisk’s approach is that you are showing ALLs the difference between plagiarizing another writer’s work and borrowing language for your own writing.  For example, while analyzing a narrative mentor text, you might do a lesson or two in which you have students identify and together create a class anchor chart collecting all of the adverbial phrases being used in the story: at about ten o-clock in the morning, with a furtive glance, on the table by the door. Students can then be shown and encouraged to use these “phrase frames” in their own writing by substituting their own details

By first identifying the language functions you want to highlight in a unit and deconstructing mentor texts with students to identify those language functions, you can then add in grammar and mechanics lessons that directly connect to those functions.  For the above example, you can have students practice prepositional phrase construction as they are used with adverbials. The hope is that these language skill lessons will feel immediately useful and meaningful to students, rather than being disconnected skill lessons that are out of context.

When instructing with a focused-eye on the language of writing, you enable students to not only see how the genre is different from others but to be able to construct it themselves, which is a powerful tool for their academic success.